WHO ARE THE KAZAKHS AND WHERE DO THEY LIVE? 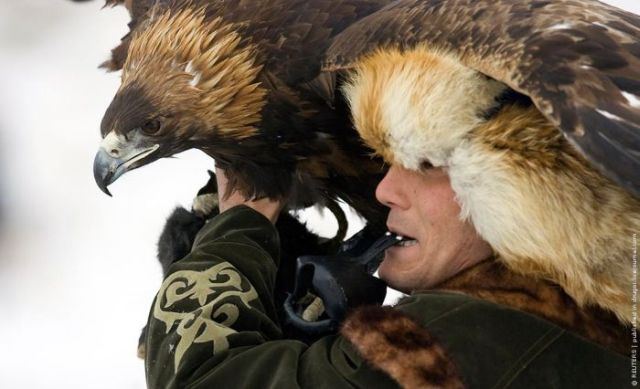 Kazakhs are a Turkic people, traditionally nomads, living mostly in Kazakhstan, also known as the Republic of Kazakhstan, the largest country in Central Asia. Kazakhstan occupies the vast grasslands between Russia, the Xinjiang Uyghur Autonomous Region of China, and the three smaller Central Asian nations to the south: Kyrgyzstan, Turkmenistan, and Uzbekistan. Kazakhs represent the majority of the population (65%) of Kazakhstan, and Kazakh is the official language of Kazakhstan. But until recently, it was rarely used in administration and government. Since the collapse of the Soviet Union, the general attitude toward Kazakh has been changing, and government bodies have been switching to Kazakh. Significant populations of Kazakh speakers can also be found in Xinjiang, Mongolia, Russia, and Uzbekistan.

WHAT KIND OF LANGUAGE IS KAZAKH? 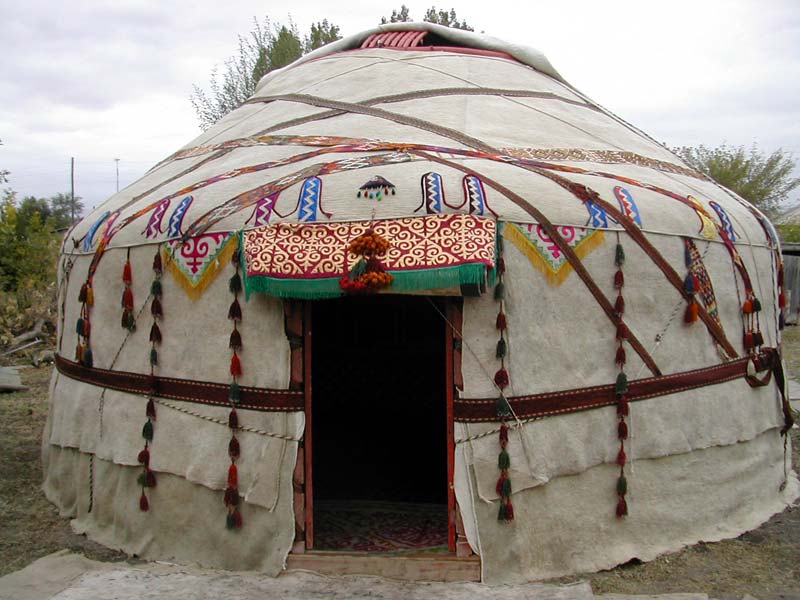 Kazakh belongs to the Turkic group of languages, which includes languages such as Uzbek, Turkish, Uyghur, and Tatar. Turkic languages have been spoken across vast territory from the Balkans to China for many centuries. Kazakh is the most widely spoken language of the Kipchak sub-branch of the Turkic languages.

Kazakh is an agglutinative language in which suffixes that indicate only one meaning are attached to the word stem one after another in a set order. Unlike some other Turkic languages, Kazakh also has a vigorous system of vowel harmony in which the vowels of the suffixes change to fit the vowels in the stem. But Kazakh does not have the difficulties that inflecting languages have with grammatical gender and multiple systems of declension and conjugation.

The vocabulary of Kazakh has been influenced by Arabic, Persian, Mongolian, and Russian. However, after the collapse of the Soviet Union, the Kazakh lexicon went through a major de-Russification process. As a result, many Russian loanwords were replaced with new Kazakh ones.

WHAT ALPHABET DO KAZAKHS USE?

Similar to other Central Asian Turkic languages, Kazakh has been written in a number of alphabets. Textual remains of early Turkic varieties from in and around Kazakhstan are attested in a variety of scripts, including the Old Turkic runic alphabet, the Old Uyghur vertical script, and others. Before Soviet rule, Kazakhs used the Perso-Arabic script to write their language. However, under Soviet rule, Kazakh adopted the Cyrillic script from Russian which Kazakh people living Kazakhstan and other post-Soviet states continue to use today. However the more than one million Kazakh speakers living in Xinjiang still use the Perso-Arabic script. 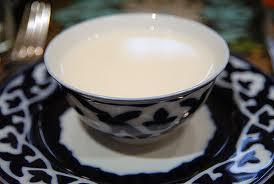 Kazakhstan is the heart of nomadic Central Asia. For centuries, the cities of southern Kazakhstan participated in the cultural renaissance of the Silk Road, while nomadic conquerors repeatedly came out from the Kazakh steppes to build great empires. Kazakh culture has been deeply influenced by the Mongol world, and many Kazakhs still honor Genghis Khan as a national hero. Like other Turko-Mongolic peoples, the ancient nomads of Kazakhstan were animistic and worshipped the sky deity Tengri. However, in the wake of the Mongol empire, most Kazakhs adopted Islam. Today, almost all Kazakh are Sunni Muslims, though traces of Tengrism are still found throughout Kazakh culture.

Regional and clan influences remain strong among the Kazakhs, who were traditionally divided into three jüz(hordes): the Senior jüz, the Middle jüz, and the Junior jüz. Each jüz has a dozen or more different clans, and although belonging to a certain jüz or clan does not play a major role in people’s social-economic lives todays, many Kazakhs are still proud to identify themselves within their jüz and most know the names of their male ancestors seven generations back. 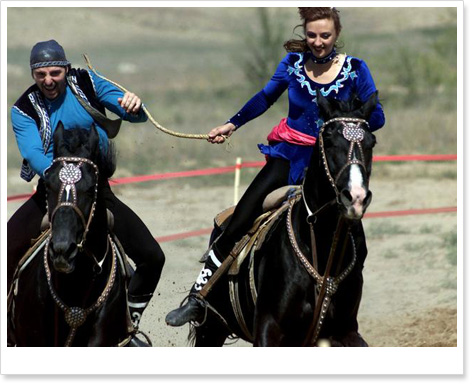 Traditionally, Kazakhs are pastoral nomads, raising horses, sheep, goats, two-humped camels, and cattle. And most Kazakh cuisine is based on mutton or horse meat, including the most popular dish called besbarmak, often called “five fingers” because of the traditional manner in which it is eaten. Some other favorite Kazakh foods include qymyz (fermented mare’s milk), shujyq (horse meat sausage), and quwyrdaq (a dish made from horse or sheep organs such as heart, liver, and kidneys and chopped vegetables).

Kazakhs are avid musicians. Traditionally, nearly every ceremony or large get-together would include someone playing the dombra, a two-stringed lute. Kazakhs also arrange song contests, called aytys, during festivities or holidays, and the public chooses the most creative bard among the contestants. Over the last 10 years, since their first appearance in the 2004 Winter Olympics, Kazakhstan has developed quite a reputation in the sports of weightlifting, boxing, cycling, and track and field. In the 2012 London Olympics, out of 116 athletes sent, Kazakhstan brought home four gold medals in weightlifting, a gold, a silver, and two bronze in boxing, one gold in cycling, one gold in the women’s triple jump, and three bronze medals in wrestling.

SOME USEFUL PHRASES IN KAZAKH

1. Kazakh is spoken as a first or second language by roughly 8 million people throughout Central Asia, most notably in Kazakhstan, but also in China’s Xinjiang Uyghur Autonomous Region, Mongolia, Tajikistan, Turkmenistan, Uzbekistan, and Afghanistan. A significant population of Kazakh speakers can also be found in Russia and Turkey.

2. A member of the Turkic language family, Kazakh shares many structural similarities to languages such as Turkish, Altay, Uzbek, Uyghur, and Turkmen, as well as being largely mutually intelligible with Kyrgyz.

3. Kazakhstan is the largest country in Central Asia (at 1.05 mil sq miles, it is also the 9th largest in the world), with the largest economy, the second largest population, and the most trade with the United States. Business partnerships with Kazakhstan and the U.S. are growing, creating a demand for Americans who can speak Kazakh.

5. Kazakhstan is home to the Baikonur Cosmodome, the world’s first and largest space launch facility.